Warning: The Following Contains SPOILERS From Arrow’s Midseason Finale, As Well As Future Episodes. Read At Your Own Risk.


So in last month’s Arrow midseason finale, Felicity Smoak was shot by a group of H.I.V.E. goons, leading into the expected cliffhanger for next week’s return. Fans have debated whether this was the end of the polarizing character, or there will be a twist and she survives her injuries. Promos for the show’s return keep suggesting that Felicity will be the one in that grave we saw in the season premiere. However, new evidence suggests that she’s not going anywhere…yet.

As seen in a few blurry set photos and a leaked international promo floating around on the web, this incident has seen Felicity being paralyzed, and she will be confined to a wheelchair. This is a similar arc to Barbara Gordon, who is paralyzed by The Joker and becomes the wheelchair-bound Oracle. Unsurprisingly, this leak has led to much uproar from fans, reviving the tiresome “Arrow is a Batman ripoff!” claims.

However, regardless of what happens to Felicity this season, she isn’t becoming Oracle. Executive producer Wendy Mericle told TV Line that, while the idea was considered early on, Felicity will not become Arrow‘s version of Oracle. “That’s something we definitely talked about [doing] with Felicity in the beginning…. But yeah, it will not be Oracle, sadly. People have to tune in to see what happens.” This shouldn’t be too surprising; Arrow only has access to a few Batman-related characters, and Barbara Gordon/Oracle – rumored to be appearing in the DC Extended Universe – is definitely not one of them.

So, with Oracle officially off the table, what happens next with a wheelchair-bound Felicity? The character will get a codename of some sort soon, but will it be an original name or one previously found in the comics? This has led to a new theory I and other fans have suggested. 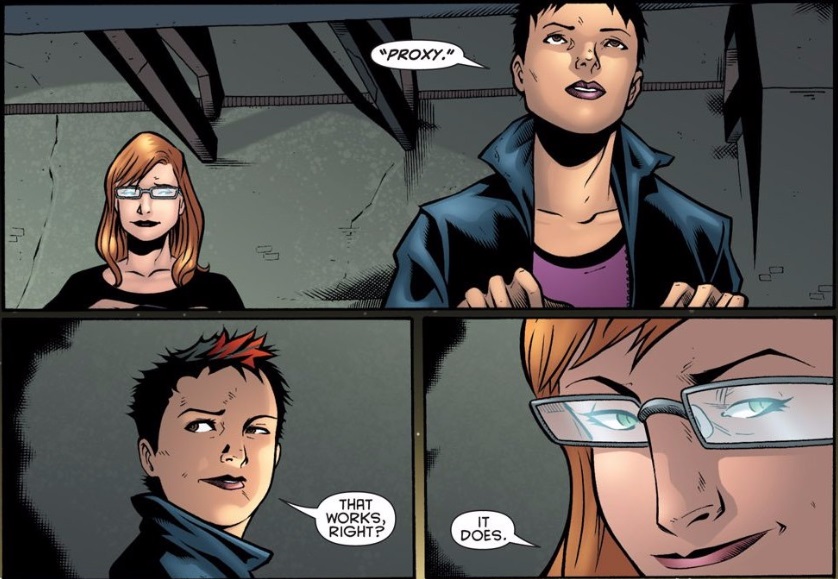 In DC Comics lore, Wendy White is an ally of the Teen Titans who is paralyzed by Wonderdog. This has led to her being confined to a wheelchair, and she ultimately becomes an ally of Oracle.

So, why would Felicity become Proxy in the Arrowverse? One clue is that, in the comics, Wendy’s father is the supervillain known as The Calculator. And Calculator is set to appear this season on Arrow. Calculator is rumored to be Felicity’s father – someone who is definitely coming to the show soon and is a villain of some sort.

All these pieces to the puzzle make me think that Arrow will be adapting Proxy’s story – but with Felicity Smoak rather than Wendy White. From Felicity’s condition and her getting a non-Oracle codename soon to her evil father coming in to Calculator appearing, it all makes sense. Of course, I could very well be wrong about this theory, but we’ll see what happens later this season.