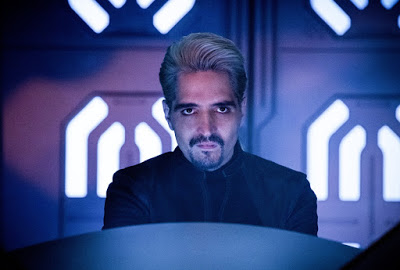 My name is Michael Thomas, after Jason Thompson had to leave on business, I have arrived with only one goal, to follow in his footsteps and review The Flash. Let’s do this!

Coming off of the “divisive” musical episode, things are finally back to normal, well… relatively speaking. Barry and Iris are showing off her engagement ring to Cecile; like a normal couple. Later on Cecile invites them to see Hamilton with her and Joe, the show is in June, a month after Iris’ (potential) death. This season has done a fantastic job at making sure we don’t forget that Iris’ life is in danger. We later see our freak of the week, Abra Kadabra (David Dastmalchian). Now, Mr. Kadabra had the making of an overly cheesy villain, but as the episode goes on he actually becomes a solid antagonist. He has these futuristic gadgets that allow him to preform unbelievable tricks, almost like magic.
Things get heavy when Kadabra wants to back to the future, you see he’s from the 64th century, and has had numerous battles against the Flash [I’m sensing a pattern here]. He has spent time jump between earths wreaking havoc, leading to Gypsy arriving to arrest him. Kadabra is getting the death penalty on Earth-19, but he has an offer. If Team Flash lets him go, he will tell them who Savitar is, and how to stop him. This is huge! We can finally put an end to this “change the future” nonsense. There’s only one problem, is letting a mass murderer walk free worth it? Iris doesn’t seem to think so. She convinces Barry to let Kadabra go with gypsy to pay for his crimes, but of course it’s not that simple. Joe will do anything to save Iris, so he does exactly what you’d expect him to do. Gypsy tries to stop him but its too late, Abra Kadabra escapes, severely injuring Caitlin in the process. The only way to save Caitlin is for Julian to remove all the shrapnel from her side. She could’ve taken off her necklace but she (understandably) didn’t want to risk turning into Killer Frost. It turns out that Caitlin’s cells regenerate when she’s injured. This leads to Caitlin walking Julian and Iris through her own surgery like a boss! At this point Caitlin is pretty much done for the rest of the episode.
With Gypsy back in town Cisco goes in hard with the sweet talk. He’s trying to have a real relationship with Gypsy, but she isn’t having any of it. Is it me or do they have nothing in common besides vibe powers? Anyway, we learn that Kadabra killed her partner three years ago, and she’s bent on revenge [kinda like Dinah Drake]. Gypsy shows no sympathy for Team Flash as she wants Abra Kadabra to die, even if he can help save Iris and stop Savitar. This causes a rift her and Cisco, as she comes across as heartless [side note: she’s kinda right]. Now, Abra Kadabra is free and plans to build a time machine. What does Barry do to create so many villains in the future? Does he becomes a jerk or something? Flash, Kid Flash, Gypsy, and Vibe team up to stop Kadabra one last time. As Kadabra is seconds away from escaping Barry fazes into the time machine, grabs Kadabra, and fazes through the other, it was a fantastic moment!
Gypsy is about to take Kadabra to Earth-19, but Barry tries one last time to get information on Savitar. Kadabra goes on to say that, as big a challenge Thawne, Zoom, and DeVoe were. Savitar is the one who broke The Flash. Gypsy and Cisco have one more awkward moment, and then she leaves, with Kadabra to meet his end. 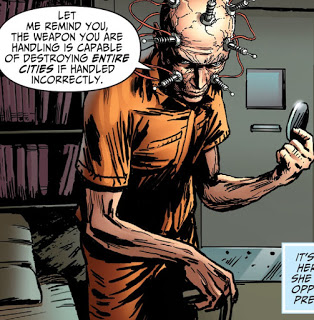 Let’s go back for a second. Clifford DeVoe aka The Thinker is a Flash villain from 1943. He has one of the greatest minds in the entire DC Universe (his name is The Thinker after all). The Thinker is an expert at extrapolating plans from scant data. For example,  He once correctly predicted an invasion by villains from another reality, and set things up so he can benefit from it. We already know that the villain in season four won’t be a speedster, will it be the Thinker?

The episode doesn’t stop there though. H.R. finally comes back [I honestly didn’t miss him] after a few nights with some woman named Ronda. Caitlin and Cisco share a moment before she suddenly has a seizure. This came out of nowhere, Cisco, H.R, and Julian try to save Caitlin but to no avail. Caitlin Snow is dead. This was punch to the gut. Just when you thought everything was fine, they through this at you.  Julian takes off her necklace in hopes saving her, and it does! Unfortunately, Killer Frost emerges, and escapes. That was a turn I did not see coming. On top of that, Barry decides to go to the future, hoping that his 2024 self will be able to help him save Iris. The next episode is going to be fun, too bad it’s a month away!

This was a solid episode. We do retread over some of the same plot points from previous episodes (Gypsy, Savitar’s identity, Killer Frost etc), but now hopefully we can move forward with these story lines. We need to get Savitar’s identity out of the way in the next episode, I don’t think I can take it anymore. We also need to either have Caitlin become Killer Frost or stay Dr. Snow. That entire subplot is getting tiring. This season as a whole has been slow, and you certainly can feel it in the home stretch. Well guys, this is where I get off. I’m like Mary Poppins, I’m off to help another friend in need. Don’t worry though, Jason will be back when The Flash returns April 25th.

Follow me on
Michael Thomas
Deputy Editor-in-Chief at WOBAM! Entertainment
Just a nerd on the internet writing about what he loves.