My Hero Academia is one of the biggest animes to come out in recent memory. The latest Shounen is based on a manga by the same name. It follows a young man named Izuku Midoriya. In a world of superheroes and villains, Izuku is striving to become the world’s greatest hero. Today, we’re going to talk about why now is the perfect time for you to start watching My Hero Academia. 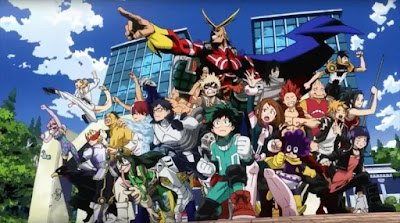 My Hero has a huge cast of characters and at times it can be challenging to keep up with so many names and faces, but that shouldn’t stop you from trying. Evey character will have something to bring to the table. Whether you love Deku’s drive, Bakugo’s tenacity, or Todoroki’s unbelievable season 2 story arc, one thing’s for certain. You’ll be entertained. Seeing Izuku go from being a quirkless loser to the best in his class is one heck of a ride.

The world of MHA is one ripped straight from a comic book. It’s honestly the reason it’s so interesting. One day, people started evolving these abilities (in the show they’re called quirks). 80% of the population are superpowered, one of the exceptions are of course our lead, Izuku Midoriya. He can’t fly, spit fire, and even jump really high. Then one day he runs into the world’s number one hero, All Might. Changing his life forever. In this world, Heroes get hired by an agency, and the better the hero, the more money you make, like athletes. This automatically changes what a hero is. Most of these pro-heroes aren’t doing it because they want to help people, they’re only doing it for the money. That right there is one of the reasons the show is so intriguing. It’s also what makes Izuku stand out.

MHA is inspired by many things, Marvel Comics, DC comics, Star Wars, Avatar: The Last Airbender etc. Seeing those ideas collide is pretty neat. The show centers on UA High School where Izuku is training to become the next number one hero. It has this X-Men vibe that is better than most modern X-Men stories. The characters deal with both super and not-so-super problems. One day you’re trying to find out what you want to do when you graduate, the next you’re fighting a serial killer in the back alley. The everyday life of these extraordinary characters is a main draw to the series.

It’s on TV. No More Excuses.

By now I don’t have much more to say about why you should watch MHA. You don’t have to subscribe to Crunchyroll or Funimation, you don’t have to stream from Hulu. My Hero Academia is now premiering on Toonami Saturday night, May, 5th. Tune in to Cartoon Network and give it a shot. Watch episode one free on your big screen. You’ll be glad you did.

BLACK LIGHTNING Gets a Premiere Date; LEGENDS OF TOMORROW Moving to New Night

The CW Updates On THE FLASH Series; ARROW Universe Is Separate From GOTHAM’s