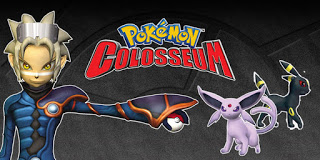 In Colosseum,
you follow the protagonist of Wes, a mysterious young man that becomes the keystone to stop an evil organization that does
evil experience with Pokemon.


With me reviewing Pokemon Yellow and Pokemon Crystal, some of you probably
thought that Emerald was next. You were
close to being right since I was a finger snap from doing so. However, looking
through the pile of Pokemon games, I realized that I owned some that deserves
more recognition. One of them is Pokemon Colosseum.

Besides being the first 3D Adventure game for Pokemon (as well as the first home
console RPG), Colosseum is breaking the
mold when it comes to a typical Pokemon game. There is traditional fighting
(although all of them is double and not single like most usually are nowadays).
However, there are no gym leaders or elite
four. The main plot is about stopping this organization mentioned in the synopsis.

The way of capturing Pokemon? Steal the
Pokemon that have been an experiment on so
you can cure them of it. There is no
means of getting a wild Pokemon of any sorts. Because of this, your options on
how to build a team is limited. While It might be annoying at first, I think it
fits considering the premise. It would
have felt weird to have as many options as the main games.

Pokemon Colosseum is arguably one of two games that players of this
franchise should get if they want a more difficult game in the franchise. That
doesn’t mean that it’s a perfect game. It has its flaws like any other games
although I wouldn’t call it game breaking.

The first problem is that there are only double battles. If there is anyone
who thinks this complaint is a nitpick, I can’t blame you. But
I would have preferred if there had been a good mix of single and double
matches giving some mixture of strategy along the way.

The second, and largest problem I have with this game. This game doesn’t allow
you to save where ever you want. Instead, you can only save at save stations. Having a save station
is particularly annoying in this game considering the “dungeons” in the game
can be close to an hour long depending on your luck.

But like I said above. These aren’t game-breaking flaws. At worse, they are
flaws that would make a game that could be a 9/10 (would I be someone who graded with points) to a 7/10. If you long for a more strategic game,
this is something for you.