Young Justice: Outsiders is set to go on their mid-season hiatus. We have a ton of things to unpack because this week not only served as the mid-season finale, but we also got four episodes instead of the usual three. We will be discussing episodes 10-13: Exceptional Human Beings, Another Freak, Nightmare Monkeys, and True Heroes. If you haven’t caught up yet watch and come back.

The first episode in this week’s batch is Exceptional Human Beings. This episode primarily focussed on Batman, Katana, and Metamorpho. Batman Inc. is in Santa Prisca gathering intel on the Metahuman traffickers. With the help of Oracle, the team discovers that Deathstroke is the new Demon’s Head, leader of the League of Shadows. We also get an update on Brion’s sister, Tera.

This episode is great. It’s action-packed, introduces us to new characters, delves into more of the Shadows workings, and gets Cassandra Savage on earth working with the Light. With all of this said: it’s still is a standalone episode. You don’t need it for the rest of the episodes to make sense. It’s a great time, but it doesn’t add anything to the story. The more significant thing is between Will and Jade. Cheshire doesn’t think she can be a good mother or a good wife. So, she opts to leave her family behind. It’s devastating. Exceptional Human Beings is a great episode that lets us live in this universe. Seeing people outside of the Team or the Outsiders is a good change of pace.

Not only did we hang out with Batman Inc. but we also got to meet Victor Stone. We don’t learn too much outside of him being a phenomenal football player, and his Dad being negligent. This is made the primary focus of the following episode, Another Freak. Victor and Silas don’t have a good relationship, that’s made even more evident after Silas doesn’t show up Victor’s big game.

The two have a huge argument ended with the lab exploding. Victor is dead, Silas’ only hope is to use a father box to bring him back. Vic is in bad shape, it is gruesome. This is a dark episode, so it only makes sense for the subplot to be about Violet and Forager’s first day of school!

Violet Harper and Fredd Bugg [with two G’s] go to Happy Harbor High. Violet is having some first day of school jitters, but there’s more to that than we’re lead to believe. The two also meet Harper Row, aka Bluebird in the comics. She’s someone to keep an eye on in the future.

Getting back to Victor, it turns out that Violet’s pain is leading her to Detroit. She uses a new ability to open a boom tube to Silas’ lab. The father box has taken control of Vic, leading him to become violent and the need to kill his father. Halo arrives just in time to hold him off. She’s able to cleanse the box and helps Vic regain control. Still not over what Silas has done to him, Victor goes to Happy Harbor with Halo. He now stays with the rest of the Outsiders.

Another Freak is a fantastic episode and might be my favorite of the season. It shows how Young Justice has found the perfect balance in tone. In one episode we have a kid get his guts blown out, leading to him becoming part machine, the next moment is a bug going to school with regular kids. And yet it all works and doesn’t clash in the slightest. 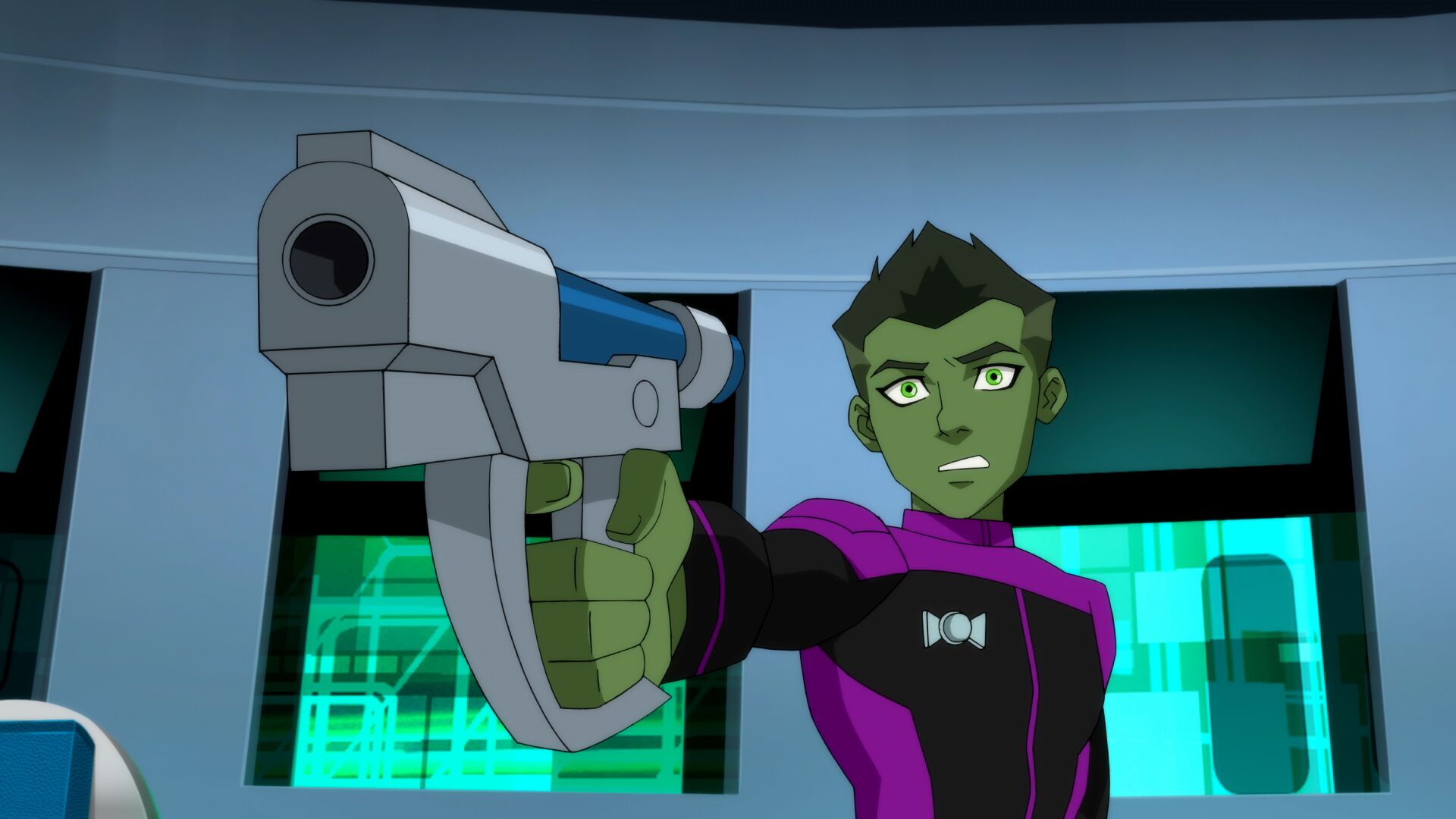 Next up is Nightmare Monkeys and good Lord what this episode was? We follow Garfield Logan (Beast Boy) for the first time all season. We see him acting in his sci-fi series, a show produced by Granny Goodness. After wearing the Goode Goggles, Garfield is trapped in a nightmare. His nightmare is experiencing the death of his teammates (specifically Wally West), the passing of his Mom and godmother, and Teen Titans Go!, yes you read that right. This episode went full-fledged crazy, and it was a strange thing to witness. The Teen Titans Go! parody featured the Doom Patrol, the show replacing Young Justice during its break, so it was a cute plug. Also, a nice touch to have them voiced by the Teen Titans Go! voice cast. It’s worth mentioning that Wally never dies in Beast Boy’s vision. Everyone else did, including Jason Todd who has been resurrected. Could this hint at the return of Kid Flash?

While this is happening to Beast Boy, we finally discover what’s going on with Halo. Gabrielle did die that night Artemis found her. Halo has the soul of a mother box living inside her. This is why Doctor Fate said she is an old soul in a young body. This doesn’t change much in the grand scheme of things, but at least we know why she can heal and has a connection to Sphere and Cyborg. This is in line with her comic book counterpart, so it’s not too shocking.

The last episode of the first half of the season is True Heroes. After everything that’s gone on the last few months, the gang finally has a lead on Tara and the rest of the metahumans. Using the information, they got from Beast Boy; the Team, Outsiders, Justice League, and Batman Inc. they were all able to attack the trafficking sites.

Geo-Force, Nightwing, Tigress, Black Lightning, Superboy, and Forager go to rescue Tara; while Dr. Jays and Violet stay back with Victor. This episode is huge. Not because the team saves the kids, not because Violet’s powers are explained, not even because Victor gains full control of his father box. This episode sets up the Judas Contract. For those who might not know, The Judas Contract is the biggest story to come from Marv Wolfman and George Parez’s legendary run on The New Teen Titans. I’m not going to spoil the story, but you already get an idea from the title of the book. Tara (aka Terra) is going to betray the team, and Deathstroke is going to take advantage.

We already had a mole in Young Justice season one, so it’ll be interesting to see what they pull from Judas Contract to make the story their own. Now, before we get ahead of ourselves, let’s slow things down. The squads gave the Light yet another major blow by freeing the children. This has to set Savage and Darkseid’s plans back. Remember in episode seven Darkseid saw the potential in a metahuman army. This is most likely why Goodness and the Light were rounding up all of these metahumans.

The second half is going to have its hands full trying to resolve all of this, but if episodes 10-13 (and the rest of the first half) are any indication, we’re in for a wild ride. Young Justice: Outsiders is going on a break but you can find all of our Young Justice coverage here.

Has the New JUSTICE LEAGUE Animated Series Just Been Confirmed?