Despite speculation to the contrary, a Man of Steel standalone sequel is still moving ahead at Warner Bros. It was recently rumored that Mad Max: Fury Road mastermind George Miller was attached to direct the next Superman movie, but this has yet to be confirmed officially. Now, Heroic Hollywood has shared a new rumor that offers an update on the film. Is Miller directing? When will the film be released? Who will be the villain? All that and more below.

First up, according to the site, Miller has yet to decide what film to direct next. However, Man of Steel 2 is essentially his if he wants it. Also, WB is apparently offering him Dark Universe, which recently lost Guillermo del Toro as a director. So, Miller has a choice between helming the most iconic superhero of all time and the lesser-known Justice League Dark. Which of these two will he choose? We’ll have to wait and see.

As for when we can expect Man of Steel 2 to be released in theaters, the studio is still trying to figure that out. Since Superman will be a key player in the two-part Justice League, which will be filming for a while, he probably won’t get his next solo movie until 2019 or 2020 at the earliest. WB also has to figure out where to slate the next Batman film, which will be directed and co-written by star Ben Affleck.

Finally, Heroic Hollywood may have revealed who will be the villain of Man of Steel 2. While this is not finalized either – after all, the movie doesn’t even have a script yet…that we know of – it sounds like a familiar antagonist in Superman lore is slated to make his big screen debut in the sequel. 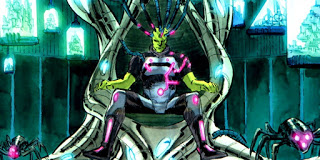 That’s right, rumor has it that Brainiac will be the villain in the Man of Steel sequel. This shouldn’t be too surprising; director Zack Snyder previously said that Brainiac was further “down the road” for the DC Extended Universe, and he was even rumored to be the villain in Justice League Part One. If this new rumor is true, it looks like the superhero ensemble may feature an entirely different adversary.

Stay tuned for more news as we have it.