There aren’t many people out there that genuinely think Batman & Robin is a good movie. There are, however, a lot of people that find it so bad that it’s good. I’m one of those people.

This movie sucks. It wants to be a cool Batman movie, but it instead is an unintentional comedy complete with laughable character portrayals and cringe-worthy one-liners.

In the opening scene, our titular heroes suit up. Director Joel Schumacher takes the opportunity in this scene to zoom in on their costumes, revealing them batnips.

Batman, Robin, and Mr. Freeze, encounter one another for the first time. Batman makes a Fred Flinstone-like entrance, while Mr. Freeze unleashes his minions known as “The Hockey Team from Hell”. In this action scene, we’re introduced to the first couple of fabulous one-liners from Schwarzenegger, including my favorite of his from the entire movie; “What killed the dinosaurs? The Ice Age!” as he proceeds to fire his freeze gun.

A couple of scenes later, we then get introduced to Dr. Pamela Isley and Antonio Diego, who become Poison Ivy and Bane respectively via a toxic experimental drug created by Dr. Jason Woodrue. These two weaving character introductions come out of left field, especially Bane’s.
The very next scene, Mr. Freeze taps his feet to the Snow Miser song from The Year Without a Santa Claus, urging his minions to sing along. Hilarious stuff.
Alicia Silverstone’s Barbara Wilson (Alfred Pennyworth’s niece) then shows up at Wayne Manor. Again, another character introduction that comes out of absolutely nowhere. This movie really feels devoid of cohesiveness, like every scene is just carelessly thrown together.
Then, we have a scene at the Gotham Botanical Gardens where a fundraiser is being held. Poison Ivy is in attendance. She seduces everyone with her pheromone dust, then Mr. Freeze (literally) crashes the party encouraging everyone to “chill” (heh, get it? He’s Mr. Freeze!). Oh, and Batman pulls out his Bat credit card during this scene. Amazing. 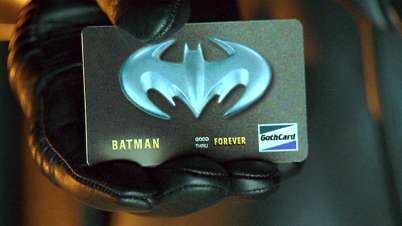 Freeze and Ivy (with the help of Bane) plan to turn a newly built telescope from an observatory in Gotham into a giant freeze ray that will kill everyone in the city, enabling Ivy’s mutant plants to take over.
Speaking of Bane, I hate how he’s represented in this movie. He’s nothing more than a henchman for Ivy who does nothing but growl and smash things here. He’s not The Hulk. Ugh.
There’s this whole plotline that comes into play involving Alfred being sick, and possibly being close to death, but it never becomes anything more than just another plotline. It does nothing to further the story. And of course, he survives in the end. Shocker!
Meanwhile, Robin has been seduced by Ivy’s spell, making him rebel against Batman. Ivy attempts to drown Robin in her lily pond, but Barbara comes to save the day as Batgirl, ending Ivy’s devious plans. Yay!

Batman, Robin, and Batgirl then take to the streets of Gotham to put an end to Mr. Freeze’s coldhearted (sorry) plans. While Freeze waits for the good guys to show up, he gets a head start on freezing Gotham, but before doing so, he yells “Let’s kick some ice!”. Oh, Arnold.
Our heroes decide to use satellites from the aforementioned observatory to reflect sunlight that’ll thaw the city. Batman tells Freeze “the heat is on” and after some fighting, their plans are successful, and good prevails. Gotham is back to normal.
Our final scene finds the three agreeing to be a team. They run towards the camera, seemingly hyping the audience up for a sequel that never came to fruition. The end.
It’s an awful movie all around, and a disgrace to the lore of Batman, but I’d be lying to you if I said it’s not an entertaining watch for me. It’s amusing to watch disastrously unfold.

John Mathews
Editor, Writer at WOBAM! Entertainment
Cinephile, gamer, and sports fan. Fortnite is life. You may know me from Letterboxd.

Cinephile, gamer, and sports fan. Fortnite is life. You may know me from Letterboxd.

How THE LAST AIRBENDER Ruined My Childhood