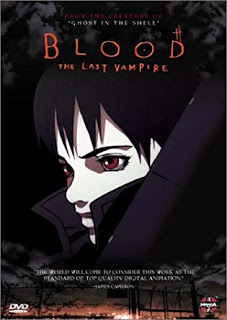 Blood: The Last Vampire is about a mysterious girl who is transported to America to slay monsters.

This movie is an interesting one. Here here, there is no dubbed or subbed version in the more traditional scenes. Production I.G had American voice actors on top of the Japanese actors. It’s an anime where dub-only and sub-only have to bit the dust and go with it if they are interested.

I know I might sound like a broken record considering my last two reviews, but this fits here as well. The movie is gorgeous.  The studio behind it isn’t a stranger with great animation, so I can’t say that it is surprising.

But outside of the technical aspects (including the voice acting), I can’t say that Blood: The Last Vampire is that impressive. I’m not saying that this movie is overall bad because I do like it. It just boils down to the fact that it feels like the script had to take a back burner because Production I.G wanted to show off their technical skills. That’s not a bad thing, would the story be meant to be more abstract then linear, and abstract isn’t what Blood: The Last Vampire is.

The story for the movie is fine, and it has a decent execution. It’s just that is just that. It’s fine. There is nothing that makes this story stand out from the rest. The movie is like a baseball player, hitting a home run, but then on the third base he wrinkles his foot and doesn’t get glorious run over the finish line. I do recommend it though, just for the technical aspects. You might not celebrate a new masterpiece, but I think you can enjoy it if you hunger for more horror.

I can’t find it on any current streaming site that I have access too, but you can find it on Amazon if you are curious.