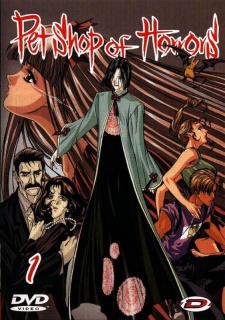 Pet
Shop of Horrors is a horror manga written by Matsuri Akino. This manga later
got a 4 episode anime released in 1999, which is what I’m reviewing today. The
story follows the mysterious Count D, who runs a pet shop in Chinatown. This
pet shop sells unordinary animals, with customers often getting killed after their
purchase.

The premise is what you get if a Stephen King Book and The
Twilight Zone had a love child. It’s very atmospheric, which it uses to its
advantage. The story comes off as a “monster of the day” (or should I say Pet
of the day in this case?) with the running theme being the “relationship”
between Count D and police officer Leon Orcot, who does his best to get Count
D in jail.

The
dynamic between the two is a classic example of “should not work,” but it does work.
The voice acting on both the dub and the sub is good for an anime made in the
90s. The animation isn’t the best (just like many other animes in the 90s), but it works for the show they want to do. I will even say that
they use the run of a mill quality of their animation to their advantage for the sake of the tone and atmosphere.

The show’s biggest weakness is the fact that it’s
four episodes long. The ending of the last episode begs the question if this
series was meant to get more episodes than it originally had. How many that
would be? I’m unsure. But I doubt it would be a lot more considering the manga
is 41 chapters long.

However, even with the length in mind, I would say that it is
worth watching if you can get your hands on it. It’s a
good appetizer for a spooky marathon night.