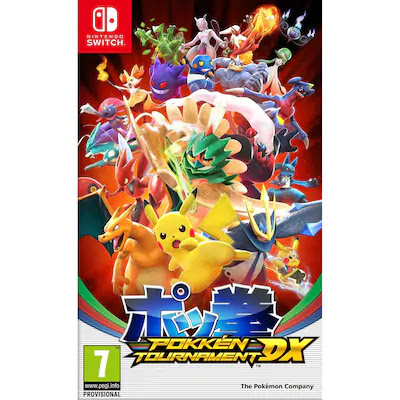 Let’s finish off this Pokemon Week with yet another spin-off title. This time, it’s Pokken Tournament. Pokken was first released back in 2015 for Wii U, with an “expansion pack” of the game going by the name of Pokken Tournament DX releasing in September last year. It’s the Expansion pack for Nintendo Switch that I’m reviewing today.

The game is a 3D fighter in the style of Namco Bandai’s usual style for their fighting games. Have you played games like Naruto Shippuden Ninja Storm, Soul Calibur or Tekken, I can’t see you have a problem to get into this game. The game works smoothly and is easy to understand. For any new potential player reading this, I recommend you to start with Pikachu. The electric mouse is the easiest to start with out of all the 21 Pokemon (23 if you count DLC).

Pokken Tournament, no matter what version you purchase, is a game best suited for multiplayer. Yes, there is a single player mode such as “story mode,” which is only online play and tournaments with a boss mixed in between. It’s so insignificant that It might not even be there. Classic mode from Super Smash Bros is more of a story than this. But those get dull quite fast. I will say though, the online connection for this game works great. I had only a few disconnects, but those were few and insignificant.

The multiplayer aspect is where the gameplay shines. The option is either to playing against somebody in a 1v1 match or 3v3.

The first one is the classic set of playing until one player has won X amount of rounds. The latter mode is where both teams chose 3 Pokemon. Whenever that team loses a Pokemon, you switch over to another Pokemon the next round. A mechanic that you can technically use as a “tag team” mechanic (which is the preferable way if you ask me). So much chaos it can create with the right people onboard is just lovely.

Pokken Tournament XD is a game that you should buy if you are a fan of Pokemon but at the same time a fan of Namco Bandai’s typical fighting games. It’s a game not worth paying full price for, but if you find on sale, I say go for it if you are interested. PS, the game’s soundtrack is among the best soundtracks I’ve ever heard in a game period. Just want to get that info out there.