With films like Teen Titans Go to the Movies, it makes you wonder, what other DC animated series should Go to the Movies? Well, that’s the topic of today’s feature. The 5 DC Animated Series that should go to the movies. Batman: The Animated Series will not be on this list only because it went to the movies way back in 1993 with Batman: Mask of the Phantasm. All other DC properties are fair game.

5. Batman the Brave and the Bold

Just because Batman: The Animated Series isn’t on this list doesn’t mean the Dark Knight isn’t represented. Batman the Brave and the Bold is a more kid-friendly take on the character. We see him team up with all sorts of characters; from Aquaman to Scooby-Doo. It’s done in a similar vein of Batman ’66. I would be interested to see what crazy stories they could come up in a feature film.

If you read my Legacy of the Superman post you’d know that I’m a HUGE fan of Superman: The Animated Series.  I firmly believe that it is probably the best incarnation of the character in any medium. With that said, it’s no surprise that the show is on the list. It doesn’t have to be set after the show. I can be a one-shot in-between season. Have him go up against the likes of Darkseid or even take him to New Genesis. There’s plenty you can do with the character. With the series being short-lived they only scratched the surface.

We don’t see much from Terry McGinnis after Batman Beyond: Return of the Joker. He makes two appearances in Justice League Unlimited, but nothing else. I would love to revisit Neo-Gotham in an animated film. There’s so much more we can see from Terry. You can have it set between the series finale and the Justice League Unlimited’s episode, Epilogue. Have him in his 20’s or even 30’s just so where we can see how he’s progressed.

With the show returning in 2019, we know that we’ll be getting more Young Justice; but there’s always been one thing I want to see from the series, what happened in-between season one and two? That’s what the movie needs to be about. Now, I know that they address this in tie-in comics as well as a video game (look it up), but that doesn’t mean it can’t happen in animation. As much as I loved season 2 I couldn’t help but miss the original team. This could be the last hurrah for Robin, Kid Flash, Aqualad and the rest. I think it’s could be something truly special. 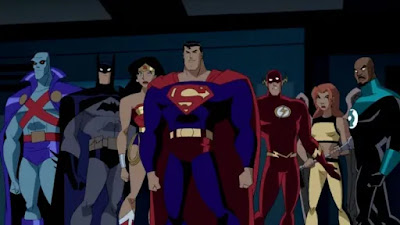 Not surprising but our number one spot goes to Justice League Unlimited. The show that inspired a new generation of DC fans; JLU is still the best adaptation of the League in recent memory. Lasting only 4 seasons, JLU still has stories that can be told. What happened after the finale? Are Darkseid and Lex Luthor still alive? Did they really find the anti-life equation? Does Brainiac ever come back? What happens in-between JLU and Batman Beyond? So many questions. JLU is a goldmine that’s waiting to be revisited.

What shows do you think deserve a theatrical debut? Teen Titans? The Legion of Superheroes? The Super Friends? There’s still plenty to talk about. Let us know your thoughts at @WOBAMEnt on Twitter, Facebook, and Instagram!

Has Warner Bros. Offered WONDER WOMAN To A Female Director?