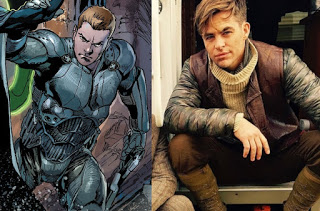 The other day, we got our first look at Chris Pine as Steve Trevor on the set of Wonder Woman. He looked to be wearing a World War I-era wardrobe, which confused some fans. It was widely expected that Trevor will appear in the present day DC Extended Universe, especially since Pine signed a multi-picture deal for the role.

Now, a new rumor from Heroic Hollywood seems to clear up this confusion. It explains how Trevor plays into both the past and the present timelines in Wonder Woman. How so, exactly?

[Warning: The Following May Contain SPOILERS From Wonder Woman.]

So, according to Heroic Hollywood, Chris Pine is playing both Steve Trevor in the present day and Steve Trevor’s grandfather in the past. During the World War I era, Grandpa Trevor crash-lands onto Diana’s home island of Themiscyra. He later introduces her to the outside world and ultimately helps her defeat Ares. Afterwards, Trevor Sr. passes way.

Later, in the present day, Wonder Woman is fighting Ares once more. Here, Diana meets Trevor’s grandson, Steve. The two look exactly the same, so Pine will be playing a dual role.

This isn’t too different from the 1970s Wonder Woman television series. In that show, there was a Steve Trevor Sr. during World War II, and then there’s his son, Steve Trevor Jr., during the ’70s. Lyle Waggoner played both Trevors, and they were both allies to Wonder Woman. It is cool that they’re seemingly doing a tweaked version of that in the Wonder Woman movie.

Plastique Will Be Introduced This Season On THE FLASH