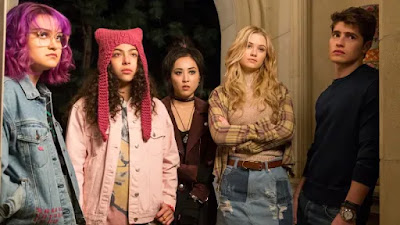 The Runaways will be returning for a second season on Hulu December 21st. The series has always felt like its own standalone story. So much so, you’d never know that it was set in the same world as Thor: Ragnarok or Avengers: Infinity War. Well, after the events of the first season, we will finally see that connection.

During a set visit earlier this month, showrunners Josh Schwartz and Samantha Savage talked about referencing the larger MCU in the second season. We’ll have a reference, late in the season, that will probably be our first real breadcrumb that connects us to the MCU in some way, said Savage.Will it reference the events of the first Avengers film like the Netflix shows or will it reference more current events like Wakanda going public or the snap from Avengers: Infinity War? We likely won’t know until the show’s release on December 21st.

We also have a few more details on season 2. We’ll be spoiling events from the first season so if you haven’t already, go check out Runaways on Hulu!

We ended the first season with our group of misfits running away from home. They found out that their parents are super villains so they made the right move by getting out when they did. The second season will pick up a mere 24-36 hours after the season one finale. The kids will have to learn how to work together in order to survive on their own. Schwartz went on to say: Sure, well here we are at the hostel (their hideout in the comics). You notice we have our bat cave so that’s awesome. Schwartz then added: There’s some characters who appear in the book who will be appearing this season in the show and we’re very excited about, which I assume we cannot talk about at all. Savage then ads: They’re really popular, exciting characters.


Runaways season 2 will be available on Hulu December 21st.